Ready to test with more than 350 connectivity and cellular chipsets.

Register for our Next Webinar

LitePoint presents a series of webinars packed with the information you need for the complexities of testing the newest wireless technologies.

Software downloads & technical, or hardware support when you need it.

Give us a call or send us a message, our sales team is here to help.

Please provide your details below and LitePoint will be in touch within two business days.

We’re living in an era inundated with smart devices and their need for data and seamless connectivity. This influx will only intensify with the arrival and adoption of 5G.

Unlike previous generations of cellular technologies, which primarily focused on mobile communication, 5G is designed to offer more ubiquitous support for heterogeneous devices used in several industry verticals. 5G comes with a lofty promise of theoretical data rates as high as 10 Gb/s, latency lower than 1 ms, and massive connection density of nearly 1 million/connections/km2.

5G is truly optimized to support not just data-hungry use cases like video streaming over smartphones, tablets, and customer-premises equipment (CPEs), but also latency-sensitive use cases such as remote healthcare and automotive connectivity as well as dense communication between indoor and outdoor IoT devices. But how does 5G deliver such enhanced capabilities?

5G brought about several transformations in the air interface to deliver high performance with improved efficiency, one of which is the addition of new spectrum. It’s supported in both the sub-6-GHz frequency range 1 (FR1) spanning from 410 MHz to 7.125 GHz, and the mmWave frequency range 2 (FR2) spanning over mmWave frequencies from 24.25 to 52.6 GHz. Adding these higher frequencies not only enables more continuous spectrum, translating into higher bandwidths (100 MHz/400 MHz) and data rates, but allows for a flexible subcarrier spacing (15/30/60/120 kHz), facilitating a scalable deployment.

With support for enhanced mobile broadband (eMBB) applications, 5G can operate over mmWave frequency bands. Though these frequencies offer wider channel bandwidths, dramatically improving throughput, they’re exceptionally prone to path loss due to smaller wavelengths, causing reduction in power density and distance of propagation. As a result, the communication in the FR2 range requires devices to operate in a lower signal-to-noise ratio (SNR) environment, making it sensitive to RF impairments.

To compensate for this loss, 5G New Radio (NR) employs beamforming, which uses multiple phased-array antenna modules to maximize and steer radio energy in a specific direction (Fig. 1). This is achieved by independently feeding each of the elements in the array with a signal that’s adjusted for phase and amplitude. As a result, there’s a constructive addition only in the desired direction and null in other directions. This improves the SNR and increases the chances of signal reception at high frequencies.

For a certain gain, the size of the antenna aperture is inversely proportional to the frequency. This necessitates that many of these elements be integrated in a physical antenna module to maintain a certain output power and capture capability.

Though the beamforming technique may sound simple, it drives significant changes in the radio-frequency front end (RFFE) and antenna design.

A RFFE contains active electronic circuitry that’s responsible for converting the information from the baseband to radio signals. The information for each band is processed by several elements in the RF chain (power amplifiers, low-noise amplifiers, filters, tuners, and so on) and fed at the appropriate power level to the right antenna. For devices designed to operate at lower frequencies, the RFFE circuitry and antennas are physically separate as the antenna dimensions are larger and the RF losses are low.

However, at mmWave frequencies, the RF circuitry densifies to feed both the horizontal and the vertical polarizations of several different antenna elements, making it extremely important to integrate the radiating antenna elements with the active radio circuitry, and shrinking the RFFE chain to minimize the signal attenuation. For this reason, it becomes extremely crucial to characterize and verify the performance of the integrated RFFE, also referred to as the mmWave antenna module (Fig. 2).

2. It’s imperative to characterize and verify the performance of the integrated RFFE, also referred to as the mmWave antenna module.

All of these physical-layer changes have also prompted significant RF hardware design and antenna changes, making it extremely important and, at the same time, challenging, to validate the end-user device performance. Let’s explore some of the test challenges and considerations associated with operation at mmWave frequencies.

The integration of the RFFE and antenna arrays makes RF probing problematic, eliminating the option of conducted testing. At the frequencies used in LTE or 5G FR1, the performance of the transmitter and receiver is measured using the conducted test mode, and antenna performance is verified by a radiated test methodology. But at mmWave frequencies, all tests are performed over the air (OTA) in a shielded environment.

As described earlier, mmWave antenna arrays consist of multiple small elements, fed with a single data stream (polarization) or dual data streams (dual polarization) and thus generating a three-dimensional (3D) spherical beam. As a result, we must characterize the beam’s radiation pattern in a well-calibrated setup at multiple angles to verify the DUT’s performance relative to the direction of propagation. The 3rd-Generation Partnership Project (3GPP) recognizes the spherical measurements—effective isotropic radiated power (EIRP), effective isotropic sensitivity (EIS), beam peak gain, and 3-dB beam width—as some of the key metrics to measure the performance of the transmitter and the receiver chain (Table 1).

To accomplish the above tests, the entire procedure necessitates the use of precise device positioning, alignment with the measurement antenna to avoid power loss and measurement inaccuracy, and a synchronized chamber positioner and DUT control. The overall methodology is time-consuming and can be very prone to setup errors.

The characteristics of these components can largely affect the performance of the communication system. Any imperfections resulting from either a manufacturing defect or mutating frequency response can notably degrade signal quality, resulting in poor error-vector magnitude (EVM). These effects intensify even further at higher mmWave frequencies, denser modulation schemes, and larger antenna array sizes, making test and measurement highly sensitive to some RF impairments.

For example, phase noise resulting from the local oscillator could degrade the signal-to-noise ratio (SNR), thereby constraining the use of higher-order modulations and limiting the ability to detect and demodulate weaker signals. Other factors affecting modulation accuracy could be a dc offset due to LO leakage, phase imbalance caused by a phase shift between the I and Q output signal from local oscillator or amplitude imbalance resulting from gain shift between I and Q signals (Fig. 4), errors in digital-to-analog converters (DACs), or inconsistencies in the analog mixers. All of these defects could cause a shift in EVM, resulting in an attenuated signal and distorted waveform. 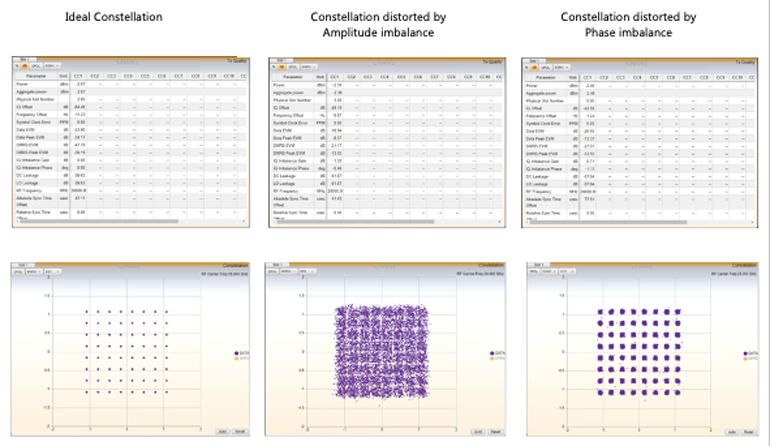 To support a diverse array of devices across disparate industry verticals, 5G offers a wide range of physical-layer features to enable flexibility in implementation. Table 2 exhibits support for wider bandwidths, flexible subcarrier spacings, multiple access schemes, and large carrier aggregation. All of it is supported over different mmWave frequency bands as specified in Table 3. 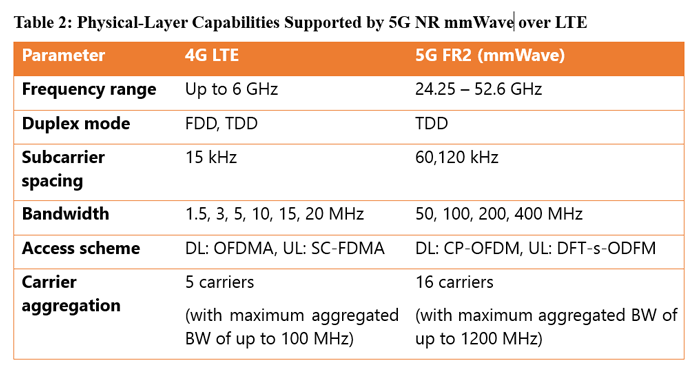 However, this flexibility gives rise to an exponential number of possible comprehensive verification test cases that could be executed based on the number of carriers, slot combinations, massive-input massive-output (MIMO) configurations, modulation schemes, orthogonal frequency-division multiplexing (OFDM) types, and bandwidths. Figure 5 shows almost 600,000 test cases for just a single mmWave frequency to cover all bandwidths, modulation schemes, and OFDM types.

5. Shown is a total test-case count sweeping across multiple resource block allocations. Note that the test-case count can vary significantly based on a combination of physical parameters under test.

Furthermore, the process could still become much more complicated if the device were to support multicarrier operation in the form of carrier aggregation, necessitating a well-built automation framework to support validation across varied intra- and inter-band combinations. Not only does this magnify the effort of test case design, development, execution, and verification, but it also directly translates into increased time to market, significantly curtailing production throughput and overall cost economics.

The goal for any technology is to be the first to market while satisfying the competing motives of maintaining quality and high production yield—mmWave is no different. However, what does differ is the dramatic increase in test-setup complexity when scaled from R&D to production, especially when moving from single-DUT to multi-DUT testing.

An ideal R&D lab setup would look simple with a seemingly direct connection between the test equipment and the measurement antenna. However, in a production environment, the setup will mostly involve use of multiple additional components.

Figure 6 shows a four-DUT OTA test setup. Apart from the mmWave test equipment, DUT, and OTA chambers, the setup requires use of multiple RF switches, control box, measurement antennas, RF cables, and adapters. Each of these elements exhibits a certain performance loss or gain based on frequency of operation. For this reason, care must be taken to ensure: 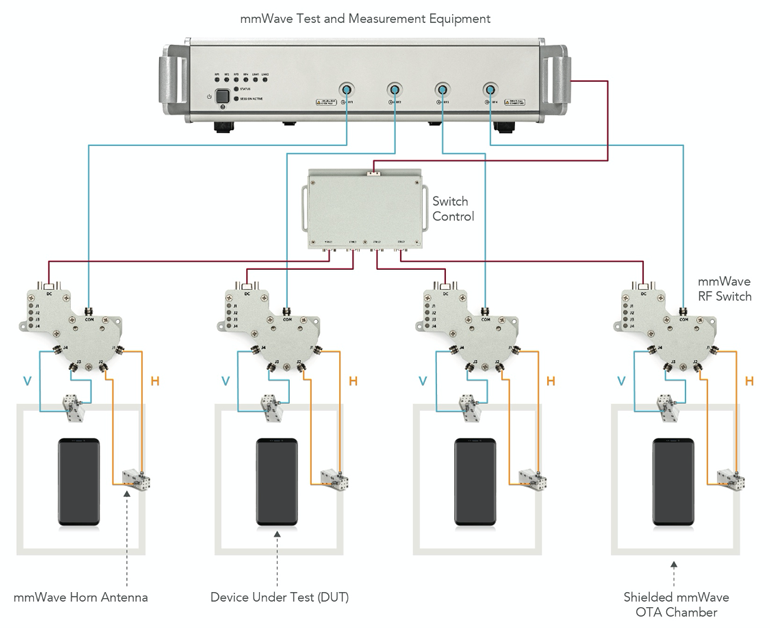 5G mmWave is still in its early stages of deployment, with evolving use models, implementation, and test methodologies. Nevertheless, with an increasing number of devices launching in the mobile and fixed-wireless-access ecosystem, ensuring quality by overcoming the test challenges outlined above will continue to be important to the success of these early products.